Two pilots to fly around the globe in Cabri G2

Two pilots are aiming to become the first in the world to complete a global circumnavigation in a two-seat helicopter.

The attempt will be made in a Guimbal Cabri G2, and the pilots, Corentin Larose and Samy Da-Dalt, also claim they will realize two firsts they see as overdue: firstly, they are French pilots, and secondly, they will be flying around the world in French helicopters.

They will take off in mid-June from Paris heliport, also known as Issy-les-Moulineaux. From there, they will hop to Le Bourget, where they plan to appear during the Paris Air Show, said Larose. Then, 80 legs are planned for a total of 300 flight hours.

The trip will meet the criteria the Federation Aeronautique Internationale (FAI) has set for a journey to be considered as going around the world, Larose explained.

The last landing will take place where the first takeoff was performed. The voyage will cross all meridians. At 21,000 nautical miles (39,000 kilometers), the distance flown will be greater in length than the Tropic of Cancer. They will never go backwards.

As the Cabri G2 is in a lighter weight category than the four-place R44 — which has itself completed a round-the-world flight — according to the FAI classification, Larose and Da-Dalt may apply for a world record.

Language is a challenge in some areas, where air traffic controllers do not speak English below a given flight altitude. The solution is to give a heads-up to Siberian controllers, for example, about the arrival of English-speaking pilots, said Larose.

The longest non-stop leg will be between Iceland and Greenland. At 350 nautical miles (650 kilometers), it will require an extra fuel tank for the Cabri G2. The helicopter’s standard tank has a capacity of 170 liters (45 US gallons). Larose has designed an additional fuel tank that meets the pair’s needs and fits into the baggage compartment.

The tank can be used with a permit to fly (as opposed to a certification for a modification), said Larose. He plans to use 70 to 80 liters (18 to 21 US gallons) in the extra fuel tank, which could accommodate more.

Fuel has been a major concern during planning. The Cabri G2’s piston engine burns Avgas 100LL and it is more difficult to find than kerosene Jet A1. “In Northern Canada, we have found places where Avgas 100LL 205-liter (55-US gallon) barrels are available, but you have to pay for each barrel you open,” said Larose. In some places in Siberia, he and Da-Dalt are arranging the delivery of suitable fuel prior to arrival. 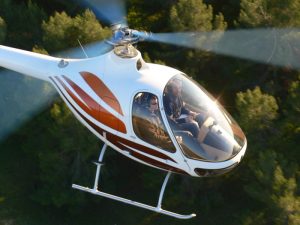 Most of the time, they will carry even less. Immersion suits and life rafts, for instance, will be shipped to those destinations where they are needed. The idea is to leave room for one passenger on a short flight.

Beyond the numbers, Larose and Da-Dalt aim to enjoy the journey. “We are not establishing a speed record,” said Larose. Time is built in for the two pilots to enjoy the countries they will overfly and they plan to visit landmark sites. They expect to fly three to four hours each day, and flying at 80 knots, the distance flown will be relatively modest.

Maintenance visits have to be carefully planned, as scheduled maintenance is required every 50 hours. In some cases, Larose and Da-Dalt need to obtain an approval from the French civil authorities to have a foreign maintenance workshop performing a check.

So what is the recipe for good preparation for flying around the world? “Don’t discourage, do things early and orderly – first find the helicopter, then the insurer, and then the fuel,” Larose answered. Both Cabri G2s will be rented from Hélicoptères Guimbal.

As for funding, partnerships were found with equipment suppliers and a crowdfunding effort has been launched.

Larose also flies fixed-wing aircraft, including gliders. He describes his job as creating companies in software architecture and algorithms.

Da-Dalt flies ultralight fixed-wing aircraft and helicopters and spends time in mountain activities, including gliding and paragliding. He offers sightseeing flights, in addition to his job as a skiing instructor.

This story was edited on April 30 to reflect the fact that Hélicoptères Guimbal did not formally approve the addition of the pair’s extra fuel tank.


Ready to find out more?